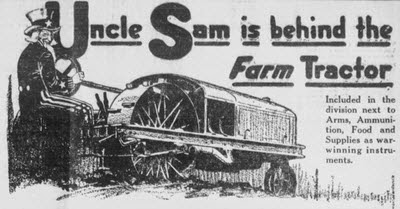 Food Production holds first place in the industries of the United States. Now more than ever before, extensive and intensive farming is of vital importance to the preservation of those principles upon which our nation is built — to which our resources and our lives are pledged. Heretofore, man-power has been depended upon in the agricultural field. Today, that manpower is being diverted to the grim fields of war. The activities of the farm must be assumed by other power.


In this crisis, one means stands head and shoulders above all others. It is represented by the farm tractor, which through concentration of endeavor has but lately come into its own.

So important is the Farm Tractor that it has been included by the United States Priority Board in the division next to arms, ammunition, food and supplies as war-winning instruments. During the past four years, there has been developed in the City of Columbus, a farm tractor built upon a more simple, scientific, and practical principle than any other now on the market.

This engineering principle materially broadens the scope and usefulness of the farm tractor and makes the farmer boy tractor a leader in efficiency, adaptability and economy. The demand for such a tractor as the Farmer Boy is unlimited.

Tractors were a game changer back in 1916. While they were revolutionizing farming, tractor manufacturing facilities were recognized by many to offer long term economic benefits to communities as well as investors. This article is about what these new machines were meaning to farmers and the general population.

Some notion of the outlook for the farm tractor, as seen by La Crosse business men engaged in its manufacture, may be gathered from the action of these gentlemen in capitalizing the La Crosse Tractor company, which took over a $200,000 corporation, for a million and a half, a sum seven and one-half times the original investment.

That of course, is a matter of business judgment, but when one makes general conditions upon which this industry must depend the objective of investigation, the reason for the immense scope of the enterprise becomes apparent.

La Crosse has enjoyed considerable growth in an industrial way, and many strong factories are in operation here. However, the hope that there might come to us some industry of vast proportions that might mean as much to La Crosse as the Buick automobile factory means to Flint, Michigan, or the National Cash Register company factory means to Dayton, Ohio, has not been indulged with any abiding faith. The reason is that while at present La Crosse enjoys fair average conditions for manufacturing it does not present such exceptional advantages as would be calculated of themselves to attract the very largest type of industries. If such an industry is to come to this city it must deal with a product that can be manufactured about as well in one city as in another, which leaves the thing largely a matter of luck.

A Turn of Fortune

Perhaps to the mere chance that the Sta-rite Engine company engaged in the manufacture of farm tractors may be credited the coming to La Crosse of that mythical thing for which its people have hoped - a great industry that shall carry the name of the Gateway City into every farming county in the nation.

The factories that get the jump on the business of manufacturing farm tractors seem to have a great future. This industry now occupies relatively the same position that the automobile industry occupied some ten years ago, and its possibilities may fairly be measured by the development and expansion of the latter industry to its present stupendous portions.

The farm tractor is now recognized by the American farmer as an essential to progressive farming. Its reputation is made. There are some seven million farmers in the United States. Of these somewhere near three millions own farm properties that warrant the use of light tractors. To date not more than 70,000 are supplied, and of the nearly three million remaining probably every one expects to buy a tractor. This gives an idea of the volume of business to begin with, and that volume is multiplied by the fact that the life of these machines is not eternal and that by the time the territory is well supplied there will be a demand for new machines to replace those that have been worn out.

An illustration of the reason why the farmer has turned so eagerly to the tractor may be gathered from a few statistics. It has been demonstrated that the tractor will plow and disc a given field in one-half the time required with horses. Since its operation is much cheaper than that of horses the saving is better than fifty per cent and the farmer is given leisure for other things. But that represents a small part of the advantage only, for it is in crop maturity and crop saving that the great profit exists. The tractor permits the ground to be prepared early and quickly: this permits also of early cropping and threshing. In this way there is the thorough development of the crop, and it is all harvested. The loss through crop immaturity and late harvesting and threshing thus obviated is figured in millions.

Buying a tractor is not a hardship to the farmer, and he knows it. There are in the United States some twenty-five million horses and mules valued at about three billion dollars and in effect buying a tractor is merely a trade. A farmer who has eight horses sells four of them to buy a tractor. He gains not only